As discussed in the previous chapters of the Geoengineer.org series on Slope Stability, a single failure surface can be analyzed via various methods that evolved over the years to derive its Factor of Safety (FoS). However, when assessing the stability of either man-made or natural slopes, an engineer must select the most critical surface, i.e., the one with the lowest FoS. After the selection of this surface, designers must decide whether the slope should be reinforced to reach a minimum required FoS. There have been cases in which projects radically changed due to slope stability considerations with the decision-making process being both a technical and a financial issue.

Before the evolution of computational tools, the selection of the critical failure surface was a complex issue that requiring multiple, time-consuming analyses conducted by hand. Nonetheless, technological advancements have enabled the execution of numerous analyses. Hence, the critical failure surface and its FoS can be readily selected after several iterations. In two-dimensional (2D) models, the time needed to detect this surface is negligible, while in three-dimensional (3D) analyses the process is more time-consuming but not to a large extent.

The steps that are followed to conduct a search for the critical failure surface typically include:

1. Definition of the geometry of the slope: In the case of a 2D analysis, a representative cross-section of the model is derived. In a 3D analysis, Digital Elevation Models (DEMs) of the ground can be utilized. The extents of the geometry (left and right borders) are arbitrarily selected so that they do not impact the failure surfaces (boundary effects). It is critical to avoid constraining the model since many potential failure surfaces can be excluded from the critical search analysis (Figure 1a-c). At  this stage, the existence of any tensile cracks must also be defined.

2. Assignment of soil properties: The properties of the ground are inserted in the analysis. These include the unit weight of the soil layer and its shear strength characteristics. Usually, the Mohr-Coulomb criterion is used, hence, the cohesion and the friction of the material(s) are required. If the analysis is performed under undrained conditions, the undrained shear strength of the ground (in clayey layers) can be used (c=cu). Nonetheless, the evolution of slope stability software has enabled the employment of multiple failure criteria such as the Hoek-Brown criterion (mostly used in rockmasses), Barton-Bandis criterion that defines the shear strength of a discontinuity, or even anisotropic shear strength criteria (in anisotropic soils or rockmasses).

If the model contains more than one soil layer, their geometry must be incorporated. In 2D models, the separation between two layers is defined by one or more line segments whilst in 3D models, they could be segregated via a plane or a more complex geometric structure.

3. Import groundwater conditions: The effect of the groundwater on the stability of a slope is critical. Pore-water pressure build-up tends to decrease the normal effective strength of the ground reducing its shear strength. The groundwater conditions are usually taken into consideration by: i) assigning a water table, or ii) assuming an Ru value. The water table is the surface that distinguishes the saturated zone (where all soil voids are filled with water) and the unsaturated zone. The Ru value is the ratio of the pore-water pressure to the normal (or overburden) stress, i.e., its utilization is an indirect method to account for the presence of water. When a soil layer lies both above and below the water table, two values of its unit weight must be considered (γdry and γsaturated, respectively).

An example of how the model should look after the completion of the first 3 stages is given in Figure 2.

4. Consideration of external or support loads: The effect of external loads or support added to the slope must be taken into consideration. The external loads may be static (e.g., a structure founded on the top of the slope) or dynamic (e.g., the impact of an earthquake) and must be incorporated in the model as they affect a slope’s FoS. The support loads are usually considered once the derived FoS is found inadequate hence the slope is reinforced. Some of the measures that apply a support load include soil nails, geotextiles, rock bolts and anchors.

5. Definition of slope stability method for analysis: The selection of the slope stability method highly impacts the results of the analysis. Most slope stability methods have been incorporated into most commercially available software. The Ordinary, Bishop, Janbu (simplified and corrected), Spencer and Morgenstern-Price methods are usually available with the latter two being more advanced. The utilization of different methods will not only result in a divergent FoS but could also yield a different critical failure surface. The number of slices is also defined in this stage. A higher number of slices results in more accurate results but increases the time needed for the critical search analysis.

6. Selection of the grid for failure surface search: The next step involves the determination of a grid from which the derivation of the centers for all the failure surfaces to be analyzed, is made. The grid may be selected from the user or be auto-generated. In the first case, an engineer must have the knowledge to derive an adequate grid that would certainly include the critical surface.

7. Compute the FoS: After all the parameters of the model are well-defined, the analysis may proceed to derive the surface with the lowest FoS. Numerous failure surfaces with multiple radii and with their centers located in the selected grid, are considered. Eventually, the critical surface and its FoS will be selected.

8. Interpretation of the results: The interpretation of the results requires engineering judgement and is a crucial part of the analysis. First of all, an engineer must identify insignificant failure modes that result in low factors of safety. For example, a very shallow failure surface may have minor effects on the project of interest, hence, it could be more convenient to neglect than to apply support measures or radically change the design. Moreover, the geometry of the derived failure surface must satisfy some requirements. For instance, if the failure surface is deeper than anticipated, the designers must consider whether the soil properties assumptions are valid. It is highly probable that the mechanical properties of the ground increase with depth, hence, the derived surface could present a higher FoS.

Once an engineer selects a valid failure surface, its stability is assessed. If the FoS of that surface is adequate then no measures are required. However, when the FoS is lower than required, then support measures like those included in step 4 need to be considered. Other stabilization techniques include the construction of retaining walls or structures at the toe of the slope, as well as drainage of the slope.

It is noted that even if the FoS is greater than one (theoretically the potential failure surface is stable), the design FoS of an engineering project is typically higher in favor of conservatism.

The FoS practically defines when a slope is unstable (FoS < 1.0). If the FoS was a deterministic variable then any value higher than 1.0 would be sufficient to classify a slope as stable. However, the uncertainties incorporated in the derivation of the FoS (the method of analysis, the physical and mechanical properties of the ground, the geometry of the ground, the seismic load and others) impose a degree of uncertainty in its final value. Therefore, a probabilistic analysis is required to determine a confidence interval for the FoS.

Since a probabilistic model is used, the question is not whether a slope is stable or unstable but what is the probability of a slope to fail. Depending on the significance of a project, engineers derive a tolerable probability of failure for the slope. An example of such an approach adopted by the U.S. Washington State Department of Transportation (WSDOT) is given in Table 1. 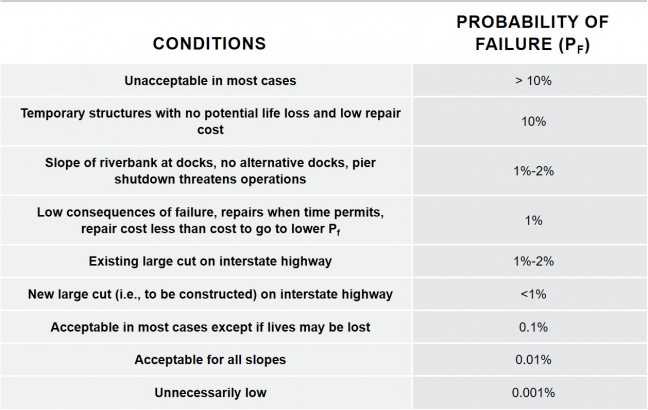 Here, we demonstrate an indicative procedure that is followed in order to derive the design FoS. It should be noted that regulations change according to the standards applicable to each country, as well as based on the significance of the project.

Various standards/codes have been developed to derive a minimum FoS that will be adequate for a given slope and project. Eurocode 7 suggests an approach known as the partial factor principle. This principle involves placing partial factors on all the acting loads and the material properties. Those factors act in favor of safety increasing the parameters that destabilize the slope and vice versa. The partial factors that are applied to forces and to the soil’s shear strength parameters (assuming the Mohr-Coulomb failure criterion) and unit weight according to BS EN 1997-1:2004 are presented in Tables 2 and 3, respectively. The equations that transform the raw parameters into design parameters are:

F and X are the initial values of a force and material properties, respectively.

γf and γΜ are the partial factors for forces and material properties, respectively and

Fd and Xd are the design values of the forces and material properties, respectively. 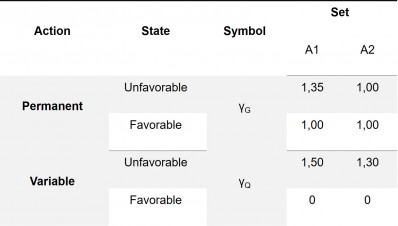 Combination 2 tends to be more critical in almost all situations and thus it is the one from which the lowest FoS derives.

In static conditions, the minimum FoS for the critical failure surface must be greater than 1.25 after incorporating the aforementioned partial factors. If there is high uncertainty on the parameters of the analysis (e.g., shear strength parameters of the ground), a probabilistic analysis (e.g., a Monte Carlo model) can be used to determine the probability of failure given the uncertainty in the input parameters. In general, the greater the uncertainty the higher the required FoS to achieve a minor probability of failure.

When seismic slope stability analysis is conducted, the equivalent minimum factor of safety may be reduced to 1.10. An earthquake force is a dynamic load that lasts for a short period hence a lower FoS can be assumed. Consequently, even if the FoS of a potential failure surface temporarily drops below 1.0, the ground would be displaced but not to an extent of complete failure. To derive that seismically induced displacement, the Newmark's sliding block analysis, among other methods, is used.

The critical failure surface must comply with both static and seismic required factors of safety. Moreover, it is probable that the critical surface changes when the seismic load is applied. In that case, both critical surfaces must be assessed.

Definition of Factor of Safety Slope stability is  controlled by 2 main factors: the driving and...

As discussed in Mechanics of Slope Stability, the most widely used approach for assessing both 2-d...

Slide3 and RS2 : The Tools of Choice for Back-Analysis of an Open Pit Mine Highwall Failure

The Methodology Step 2 – Iterative calibration of the base case model reproduced the observed fail...

Assessing a slope’s stability is a challenging yet important aspect of civil engineering. In its...