In this chapter of the Geoengineer.org series on Slope Stability, a simple example of slope stability analysis will be illustrated. The analysis will be conducted in Slide2 v6.0, a commercial 2D slope stability software by Rocscience that utilizes the Limit Equilibrium Method (LEM) and can be used for the analyses of soil and rock slopes, dams, embankments and retaining walls. Since the analysis will be two-dimensional, a representative cross-section of an idealized slope is developed to derive meaningful insights.

More specifically, a 1:1 slope (45 degrees inclination) that can be either natural or man-made will be considered. The slope height and width will both be 10 meters and the ground conditions will be comprised by two soil layers, a silty clay and a clay. The shear strength of both soils will be assessed via the Mohr-Coulomb failure criterion, as:

Where t is the shear strength, σn is the effective stress, σt is the total stress, u is the pore-water pressure, c is the cohesion and φ is the friction angle. In actual real-world cases, the strength parameters of the soil can be determined in drained, triaxial or direct shear tests. The analysis will be conducted assuming long-term conditions; therefore, the effective stresses will be used. In case of short-term analysis, and if undrained conditions are presumed, the undrained shear strength of the ground cu is used (c=cu and φ=0°) in the LEM analysis.

The soil parameters that are assumed for the slope stability analysis are given in Table 1.

Table 1. The soil parameters used in the example analysis

The boundaries of the model are placed at a distance of 15 meters from the toe and the crown of the slope, respectively, so that the critical failure surface search will not be affected. The initial geometry of the ground, as inserted in Slide2, is illustrated in Figure 1.

The objective of a slope stability analysis is to detect the critical failure surface and derive its Factor of Safety (FoS). If the FoS is greater than the minimum acceptable FoS, as defined by the codes/standards/regulations and the significance of the project, the slope is considered stable and no further actions may take place. On the contrary, if the FoS is found to be inadequate, support measures need to be implemented. For the purposes of the present simplified example, an indicative FoS greater than 1.25 will be required for the slope to be considered stable.

Slide2 enables the utilization of multiple limit equilibrium methods (e.g., Ordinary, Bishop, Janbu, Spencer, Morgenstern-Price). Here, the Bishop and the Spencer methods will be used, for illustration purposes. The number of slices for each surface analyzed is set to 30 and the maximum number of iterations to 50.

At this stage, if any additional external load impacts the stability of the slope, it should be added in the analysis. In our case, we do not consider any external loads. Finally, an auto-generated or a manual grid based on which Slide2 will derive the failure surfaces, is determined. The grid should be large enough to ensure that the critical surface will be included in it.

The problem is currently well-defined and the computational process may begin. The FoS of the slope in dry and partially saturated conditions is derived via the Bishop and Spencer methods and the findings on the critical search surface are given in Figures 3a to 3d. The factors of safety for each case are given in Table 2.

Table 2. Factors of safety for the example slope, given the water table conditions and the limit equilibrium methods considered.

Based on the results of the Limit Equilibrium analyses, we derive the following conclusions:

In practice, an engineer must always ensure the stability of a slope given the worst-case scenario. In our simplified example, the slope is unstable in partially saturated conditions; hence, support measures must be applied so that its FoS exceeds the indicative limit value (1.25).

Many techniques to stabilize a slope and increase its FoS have been developed and employed over the years. Some of the most notable of them include the installation of drainage features, the construction of retaining walls or buttresses, the utilization of geotextiles or anchors, etc.

An optimal design also accounts for the financial feasibility of an engineering project thus, the objective of applying support measures is to increase the FoS with the minimum required and/or available resources. Hence, the selection of the most appropriate support measures is a case-specific issue.

Here, a ground stabilization technique known as soil nailing will be used to increase the FoS of the example slope. This method involves drilling holes for steel bars to be inserted into the face of the slope. The holes are subsequently grouted. As passive supports elements, soil nails are frequently utilized to stabilize slopes in soils and weak rocks. The technical characteristics that need to be defined for each soil nail are the following:

Regarding the geometry of the grid of soil nails that will be established to support a slope, additional parameters need to be determined. These are:

The assumed values of the aforementioned characteristics used for the simplified example analysis presented herein are shown in Table 3. 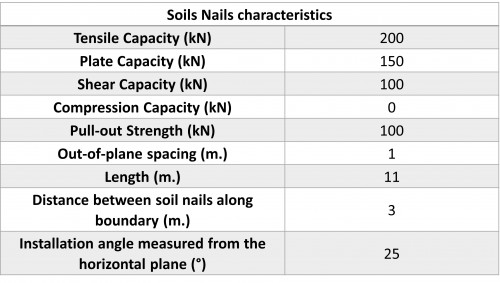 The slope supported by the soil nails is illustrated in Figure 4. Four soils nails are assumed in the 2D cross-sectional area per meter (in the third dimension). Hence if the width of the slope is 10 meters, the support measures would require 40 soil nails. The first soil nail is installed 1.7 meters measured from the crown of the slope and the last one 3.4 meters from its toe (Figure 4).

The limit equilibrium analysis, as described above, is repeated to derive the new FoS of the slope. The analysis yields a different critical failure surface and the new FoS is slightly above the assumed required value (1.25) as shown in Figures 5a and 5b. The new factors of safety for each case are given in Table 4.

Table 4. New factors of safety for the slope, after the support measures are applied.

The results of the analyses yield the following findings:

To complete the assessment of the applied support measures, the new FoS in dry conditions is also derived. It can be reasonably assumed that since the measures are adequate in partially saturated conditions, the slope will also be stable in dry conditions. Nonetheless, it is useful to derive its FoS for comparison reasons. The results are given in Figure 6a and 6b and in Table 4.

When the support measures are applied, the factors of safety in dry conditions increase by 59% and 60% considering the Bishop and Spencer method, respectively.

The support measures are acceptable in both groundwater conditions considered in this example analysis and could be implemented to stabilize the slope.

We emphasize that all the parameters given in this example (shear strength characteristics of the ground, tensile and shear strength of the soil nails, plate capacity etc.) refer to their design values after safety factors have been applied in accordance with the relevant design standards/codes/regulations.

Critical Failure Surface As discussed in the prev...

Description of Method The Spencer Method of Slic...