These photos were taken from The North-West coastline of the Greek Island of Corfu. This side of the island is largely characterized by the vertical slopes as shown in the above Figure. One can easily observe the horizontal layering of the sedimentary material. This material consists of weakly cemented, silt, clay and sand in layers. While travelling along the coastline one can see many failures such as those shown in the Figure above, next to the sea but also in another vertical slope well above the sea level. These failures are largely shallow vertical plane failures caused by stress release fracturing and cantilever block falls. Interesting papers on the failure mechanism of similar slopes along the coast of Northern California are published by Sitar (1990) and J. Hampton (2002). This topic becomes especially important if there are structures at the top of the cliff. Hampton (2002) has an interesting photo of such failure at North Esplanade beach in Pacifica, CA. A similar event of failure can be seen here! 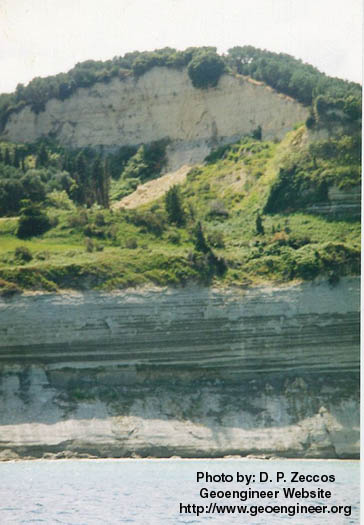 On the below photo you can see that consequent failures lead to a sea-cliff retreat which consists a great hazard for the structure. Already the retaining wall of the garden has been undermined and failed. 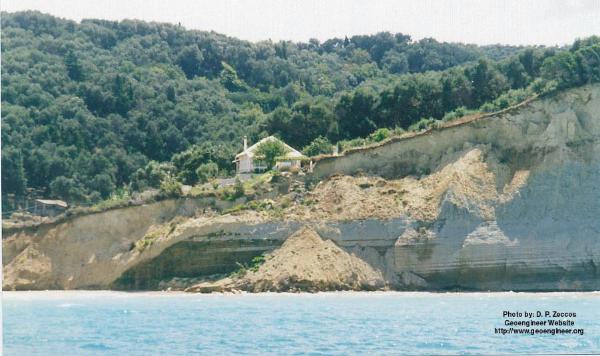 A cliff collapse that occurred in England's Jurassic Coast is considered to be the largest to hit t...

In this photo you can see a rock slope failure in the construction field of the Auburn Dam. The met...

A few months after the extensive destruction at Mount Polley copper and gold mine, the independent p...

The cliff is located near a narrow beach, along the Strait of Juan de Fuca, so large waves from the...

As discussed in Mechanics of Slope Stability, the most widely used approach for assessing both 2-d...

Developing Safe Mine Re-Entry Plans Using RS2 It would be a perfect world if slope failure didn’t...