What does freezing of shafts means?

Since more than hundred years ago in water bearing non-competent strata the freeze shaft technology started in coal mining. Today ground freezing is adopted although in other fields of civil engineering, like tunnelling and other deep excavations. The mechanical and ecological advantage of a temporary water tight construction by freezing finds favour in engineering practise for safe working below ground water.

What is the theoretical background of ground freezing technology?

Ground freezing combines the topic of mechanical strength and thermo-physics. While the nonlinear strength aspects may be clearly arranged in dependence of chosen flow-rule, the non-stationary temperature and phase influences are hardly to describe in a closed form solution. Today numerical methods allow combined multi-physics solutions, but nevertheless analytical estimations are helpful to verify the computer results. In times of the internet this report is structured in form of frequently asked questions (FAQs).

How does the frost comes into the ground?

No question about it, there is much energy necessary in ground freezing technology. Freezing can be realized especially for smaller jobs with open systems i.e. evaporation of liquid nitrogen (= LN2), but in shaft sinking closed pipe systems with brine (= watery saline solution) are used. Brine freezing is more than ten times more used than LN2-technology. Here exclusively those systems with double concentric pipes are discussed, not using LN2 but circulating brine as cooling liquid. By this the freeze pipes distributed on a so-called freezing circle absorbe the heat of the surrounding ground. A frozen cylinder is formed which may be totally frozen in dependence of time.

At what temperature does the brine works?

While liquid nitrogen (LN2) with an evaporation temperature goes down to -196 °C, brine reaches only a quarter of it. The report concerns the latter technique normally using magnesiumchloride liquid. For lower temperatures calciumchloride will be used. The cryogenic point of CaCl2 is at -55 °C, while for MgCl2 results -34 °C. Also kerosene would be possible, but is hardly used because of fire danger.

Liquid nitrogen is of course more than 7 times quicker than brine freezing and by this it can even be used for ground water flows greater 2 m/d. On the other hand the costs normally reduce its adoption for a cubature less than 500 m³ or projects with a freezing less 1 month. Frozen cylinders with brine are known up to 3,000,000 m³ and years of active freezing may be necessary.

What machines are to be used?

In dependence of the magnitude of the project small mobile or huge stationary units will be used. Freon 22, Propan, R-cooling liquids or ammonia (NH3) are used in a closed refrigerant circuit. The machine capacity varies up to 4 MW per project. Capacities of 32 W/m³ frozen ground (deviation 20 W/m³) have been used, including a loss factor of 1.5. That corresponds to 160 W/m freeze pipe (deviation 20 W/m). There are freezing plants available which are especially designed for ground freezing works and have refrigeration capacities up to 500 kW.

Which static system is the basis in freeze shaft design?

A freeze shaft is a cylindrical system (see Fig. 1) with inner radius a and outer radius b, thus the wall thickness is d = b - a. The freeze shaft - in this state as thick-walled cylinder - is stressed on his outside periphery by a depth dependent pressure p = pw + pe consisting of water plus horizontal earth pressure. 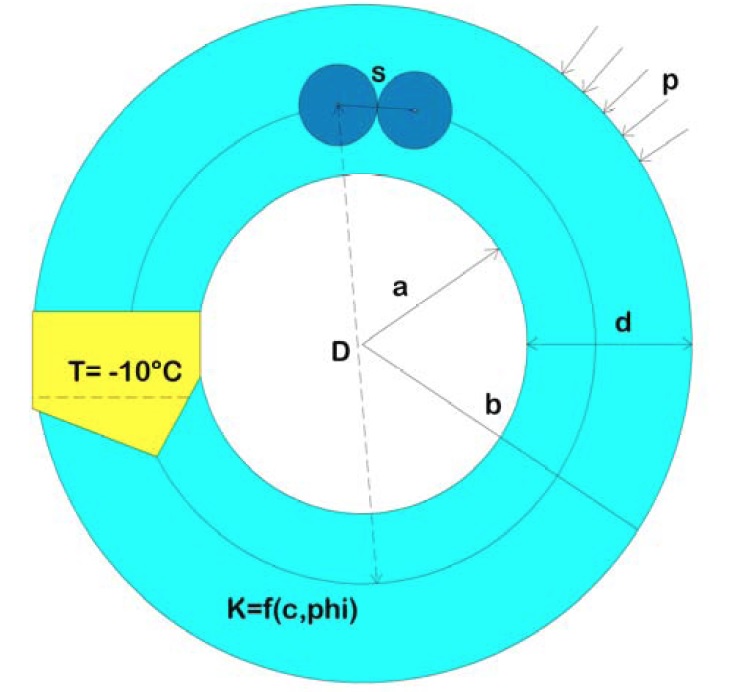 How to calculate pressure p?

The water pressure acts hydrostatic in minimum as pw = 10 kN/m³ multiplied by maximum depth in m, while horizontal earth pressure pe can be estimated to pe = 3 kN/m³*depth in m. The latter varies in dependence of strata characteristics. The water pressure may increase in dependence of saline character. The classical load assumption in historic freeze shaft design is p = 0.013 MPa per m shaft depth.

What diameters do freeze pipes have?

Casing steal pipes closed at the bottom with around 5 inch outside diameter are often used in freeze shaft constructions. API grades of J55 or even higher is favoured. API coupled connection, integral or omega are usual; an important point when up to kilometres of pipes have to be combined water-tight. The steel pipes are closed at their ends. A special rotary drilling is necessary before, because only a few percentage of vertical deviation is allowed. The inner concentric down pipes - with let’s say 3 inch diameter - are normally of polyethylene.

What is the optimum freeze pipe distance and diameter D?

Have Mohr-Coulomb criteria to be used?

Most used flow rule in soil mechanics is the Mohr-Coulomb criterion, which defines the uniaxial compression strength to K = (2*c*cosφ) / (1 - sinφ). For example a friction angle of φ = 30° and a cohesion of c = √3 = 1,73 MPa results in a strength of K = 6 MPa. Of course also other flow rules may be adopted and result as shown in literature in modified design formula.

What happens with friction angle φ and cohesion c under frost conditions?

Granular materials like sands show a loss in friction of round about 10 % in frozen conditions, vice-versa for clayey silt, but in both cases its cohesion is increasing extremely.

What is the uniaxial strength K of frozen soils?

How does it change in dependence of time t and Temperature T?

A great influence on the strength has the timedependent characteristic of frozen soils. This complex question is handled in literature under the topic of creep. The drop of the beginning uniaxial strength K of frozen soils in dependence of time t and/or temperature T can be roughly estimated to K(t,T) = K*10(years / a)/(T/°C).

Of course there is a gradient in the frozen body between pipe circle with roughly -30 °C brine and open shaft face. In analytical calculations in general a constant mean temperature is regarded. -10 °C is a representative value for brine freezing, what means that temperature at the open face should not be warmer than -3 °C.

What about seepage flow velocity?

Ground water flow shall not be greater than 2 m/d.

What frozen wall thickness d is necessary for freeze shafts?

The highest outer pressure, normally the maximum depth of the shaft is decisive for the wall thickness. For systems with no inner lining support the author developed the extended DOMKE formula:

The formula includes the assumption that the radius of plastic to elastic zone lays at √a*b and friction angleφ ≤ 30°.

Can you calculate an example?

For many cases with a representative friction angle φ = 30° a linear relationship d/a = P/K results.

I.e. for a 300 m deep shaft with p = 3.9 MPa and a strength of the strata in the same order calculates the necessary wall thickness d = a.

Is an inner lining support advantageous?

An inner lining support counteracts as inner pressure and reduces the deviator stress state at the inner rim. As known from tunnelling design the plastic zone reduces and smaller frozen wall thickness is necessary postulated the inner pressure remains constant with time. Similar for shaft wall deformation a dependency of the distance to the unexcavated shaft bottom is evident.

What are typical conductivity parameters for unfrozen and frozen soils?

While the unfrozen conductivity varies between 1.5 to 2.2 W/mK, the frozen parameters can be adopted with factor 1.5, i.e. 2.3 to 3.3 W/mK may be adequate for frozen conditions. Further parameters as heat capacity, dry density and convection data are needed for transient numerical calculations.

How long have you to wait until the wall is frozen?

During a first stage the frost is increasing until touching the frost column of the neighbour pipes. The time is dependent on many parameters, like difference temperature v0 (°C) between ground and freezing point, other thermophysical parameters of the soils and the chosen geometry of pipes, mainly their distance s (m). The necessary time calculation is a highly complex task, but t1 (in days) can be roughly approximated for stage 1 by tI = (v0*s2)/(°C*m2). Even more complicated are closed-form solutions for the stage 2, well documented in the literature mentioned above. As a role of thumb just add tII = (1 + (d/m))*(tI/days) for stage 2 and you will have an idea of time needed.

What are the costs per m³?

As in real life it will be cheaper buying huge parcels. Starting with 10 €/m³ for big projects the all inclusive price increases up to 60 €/m³ for smaller ones.

Is it possible to make a pre-design within a minute?

Ground freezing in shaft sinking is a more than 100 years old technique in mining. Although cost intensively it is a safe and successful method in water bearing strata. In this paper formula of strength and temperature are reduced to some rules of thumb, well recommended for a quick design in times without time.

The author has an experience at first hand concerning those freeze shafts in Germany built during the last 30 years. More than 100 papers have been published by him in the field of ground freezing, shaft design and other civil engineering topics. Before retiring he leaves some rules of thumb – based on experience and statistics – which might be helpful for pre-design of freeze shafts in the future. Collected data are summarized concerning the arithmetic mean (root mean square deviation in brackets).