The horizontal Soil Subgrade Reaction in Pile Foundations is often determined using the Brom’s method (Broms, 1964). The method is widely used as it takes into consideration the length of the piles (short or long), the type of the soil (cohesive or cohesionless), and the boundary condition at the pile head (free-head or fixed-head).

The method introduces certain simplifications such as a rigid-perfectly plastic behavior for the pile-soil interaction, and the dependence of the subgrade reaction on the soil type. Its main disadvantage is that it cannot be applied in a layered substratum.

Table 1: Classification of the pile response based on Broms (1964). 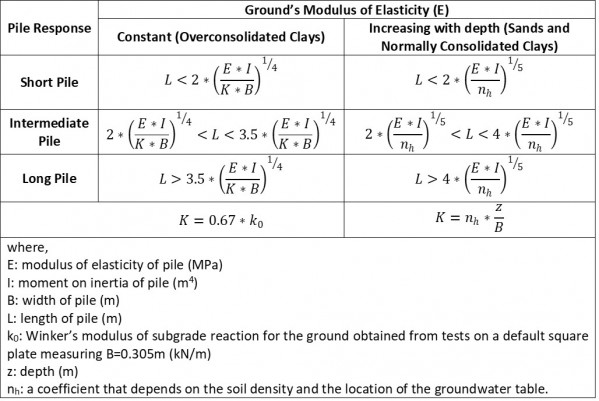 Table 2: Suggested values of the Winker’s modulus of subgrade reaction for overconsolidated clays obtained from tests on a default square plate with width B=0.305m (Kavvadas, 2008).

Based on the derived response of a pile (short, intermediate or long), the type of soil and whether the pile is defined as free-head or fixed-head, Broms (1964) categorized certain cases regarding the subgrade reaction and the developed bending moment. These cases are analyzed below.

According to Broms (1964), a short pile fails when the applied horizontal load exceeds the ultimate lateral resistance of the soil.


When a short, free-head pile founded on a cohesionless soil is subjected to a horizontal load, the deformation pattern and the resulting horizontal subgrade reaction and bending moment distributions are developed as illustrated in Figure 1.K is the coefficient of lateral earth pressure and is calculated by the ratio of the horizontal effective stress to the vertical effective stress as:

When a pile is subjected to a horizontal load, the soil is forced to develop its maximum lateral resistance which is known as the passive state lateral pressure. The maximum value of coefficient K is denoted as KP. This coefficient is a function of the soil friction angle (φ, in degrees) and is calculated as:

The maximum developed earth pressure at the bottom of the pile is equal to:

Broms (1964) derived the ultimate horizontal load Nu that a pile can carry before soil failure as:

Where B and L are the width (m) and length (m) of the pile, respectively, γ refers to the soil unit weight (kN/m3), and e is the distance between the free end of the pile and the surface of the ground (m), as depicted in Figure 1.

The maximum bending moment is developed at a certain depth z and its value is equal to:

The derived bending moment can then be compared to the moment bearing capacity of the pile.


In the case of short, fixed-head piles founded on a cohesionless soil, the subgrade reaction does not change in respect to a free-head pile. However, both the deformation pattern and the bending moment distribution differ, as illustrated in Figure 2.

The bending moment also has a different distribution and its maximum value is located at the point where the pile meets the surface of the ground beneath its fixed-end (Figure 2).


The deformation of a short, free-head pile in cohesive soils is similar to the case of cohesionless soils but, the subgrade reaction and the developed bending moment differ (Figure 3).

In cohesive soils, the undrained shear strength cu is used to obtain the maximum lateral subgrade reaction. cu is practically the shear strength of a soil when it is sheared at a constant volume. It is typically used in clayey soils when the rate of loading is much faster than the drainage rate, therefore, an undrained condition can be reasonably assumed. It should be pointed out that in the cases described below, cu is considered constant within the soil layer.

Accordingly, the maximum lateral earth pressure is calculated as:

To obtain the maximum horizontal load Nu, integration of shear forces acting on the pile is required. The integral of the shear forces at the upper part of the pile up to the maximization of the bending moment yields:

Accordingly, the corresponding integral for the shear forces at lower part of the pile yields:

where Mmax,Upper = Mmax,Lower. Moreover, based on the geometry of the problem, the following correlation can also be considered:

Finally, the maximum horizontal load Nu is correlated with f, B and cu as:


In this case, the deformation patterns are similar to the case of the free-head short pile. Nonetheless, there are differentiations in the lateral earth pressure and bending moment distributions (Figure 4).

The maximum soil subgrade pressure is the same as in the case of a free-end pile and is calculated using equation [9]. The corresponding ultimate horizontal load and the maximum bending moment that the pile is subjected to, are determined through equations [14] and [15].

Unlike short piles, when long piles are subjected to a horizontal load, they fail when their maximum bending capacity is exceeded. The pile deformation tends to be concentrated within a certain length L' (L’ ).


The behavior of a long, free-head pile founded on a cohesionless soil when subjected to a horizontal load is different than that of a short pile. The deformation patterns, the lateral earth pressure and the bending moment distributions are depicted in Figure 5.

The depth, f, where the plastic hinge forms is estimated as:


When a long, fixed-head pile founded on cohesionless soil is subjected to a horizontal load, the deformation pattern is similar to that of a free-head long pile. Nonetheless, both the resulting horizontal subgrade reaction and bending moment distributions differ, as presented in Figure 6.

As discussed earlier, the maximum horizontal load Nu is derived via the bending capacity of the pile Mu. Therefore, Nu is calculated using equation [16], multiplied by two.

In cohesive soils, the behavior of a long, free-head pile is similar. Failure typically occurs when the pile bending capacity is exceeded. As discussed in the cases of short piles, lateral earth pressures are derived using the undrained shear strength cu of the soil.

The deformation of a long, free-head pile in cohesive soils is the same as in cohesionless soils but, the subgrade reaction and the developed bending moment are altered as shown in Figure 7.

Nu is derived as a function of Mu as:

f refers to the point where the plastic hinge forms and is calculated as:

In cohesive soils, a long, fixed-head pile deforms in a similar manner as in cohesionless soils. The lateral earth pressure and bending moment change, however, and the distribution of bending moment will slightly be affected as depicted in Figure 8.

Based on the value of the undrained shear strength of the soil, the suggested value of k0 (Table 2) used is k0=54. Hence, the response of the pile is categorized through the equations of Table 1:

Accordingly, based on the characteristics of the pile and the properties of the soil, the pile can be characterized as short.

The methodology that will be used is the one described for a short, fixed-head pile in cohesive soils.

The maximum lateral earth pressure is derived via equation [9]:

The corresponding ultimate horizontal load and the maximum bending moment are calculated through equations [14] and [15].

As a result, the maximum horizontal load that the soil may carry without experiencing failure is 22,950kN. Under this horizontal load, the moment capacity of the pile must be greater than Mu=131,962.5 kNm.

A schematic of the pile deformation, the lateral earth pressure and the moment load that the pile is subjected to, are depicted in Figure 9.