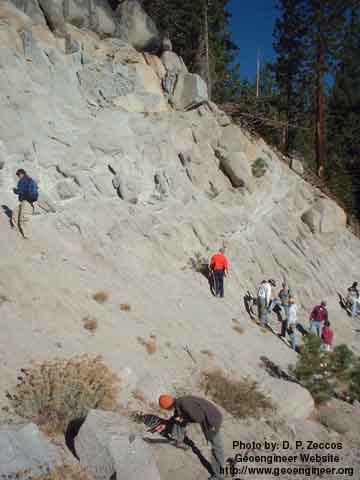 In the first photo you can see a competent, non-weathered granitic rock. In the second photo you can see a slope of granitic rock. In this outcrop the ruptures were filled with caolinite and appeared very white. The granitic rock contains also biotite (mica) as proven by the fact that the black minerals could be scratched and flake. The chemical composition of the granitic rock contains probably very small quantities of iron since the weathered material looks so white. The outcrop is very susceptible to erosion because it is not cohesive and has been under deep chemical weathering. During this procedure the feldspar weathered to clay (caolinite) and the biotite also weathered to caolinite. These minerals, during weathering, expand and the rock fractures more enhancing that way the weathering procedure. The final material is called saprolite. This is of importance because while drilling an exploration borehole into saprolite, the driller may find corestones, which are totally unweathered blocks. This fact may lead the geologist in considering that point as the depth of the “hard” rock. Exploration must continue for at least 5-10ft (1.5-3.5m)to verify that the bedrock was found. machine. A man rotated the wheel and a weight was risen. Then the weight was dropped and the wooden pile was pushed into the ground.

Information collected during the field trip in the Sierra Nevada, as part of the "Engineering Geology" course curriculum, instructed by Professor N. Sitar, Department of Civil & Environmental Engineering, University of California at Berkeley.

Hydraulic fracturing (HF) as an industrial process was introduced into the petroleum industry by a paper written by J.B. Clark of Stanolind Oil Company in 1949. It represented a major step forward i...

"There it is, take it." This is the famous line William Mulholland told the city mayor and the public after the grand opening of the LA aqueduct. Mulholland left Los Angeles with a promise to...

Land Subsidence and Monitoring in Indonesia

Hello, and welcome to my project report for CE179! My name is Victoria Lim, and I am a current senior at UC Berkeley, studying Civil and Environmental Engineering. In this report, I hope that you wi...

Though constructed with different materials and built in different sizes, dams share the same purpose of controlling water. This structure is utilized to hold back water which creates a reservoir wit...

[See a well-formatted PDF copy of our report here] Nuclear power is generated by splitting atoms to release the energy held in the nuclei at the core of those atoms. The advancement of nuclear techn...

The photo of this failure was donated by EDAFOMICH...

In the situation depicted in the above figure we...

Relative orientation of the jointing and the applied thrust

This photo is from the Auburn Dam construction si...