Large quantities of mine waste rock material (non-ore overburden) are generally available from open pit mine cuts for use in water storage and tailing impoundment embankment fills, as well as for site grading fills beneath heap leach pads and process facilities. The mine waste rock, already blasted or ripped and loaded into rock haul trucks, can be economically hauled and placed in embankment fills several miles from the open pit mine for less cost than local borrow development within the planned impoundment or leach pad grading fill limits. This article discusses rockfill placement and compaction guidelines successfully used to construct stable engineered fill structures at mine sites, including some of the largest tailing dam structures in California, Nevada, South Dakota and Washington.

Modern day rockfill construction must rely heavily on past experiences for guidance in determining acceptable procedures for the placement and compaction of large rock fragments in a compacted fill structure. The conventional earthfill field and laboratory test methods for controlling lift thickness, gradation, moisture content, and compaction are not applicable to rockfills and must be modified to a site specific compactive effort specification using large-scale test fills and heavy vibratory roller compactors. Based on rockfill construction experience and engineering studies on several large-scale test fills, a general set of guidelines can be established for rockfill placement and compaction as discussed below. Typical rockfill placement and compaction operations, as well as large scale rockfill density and gradation testing are shown on Photos 1 to 7. 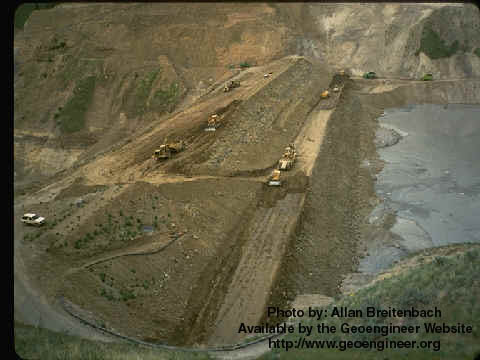 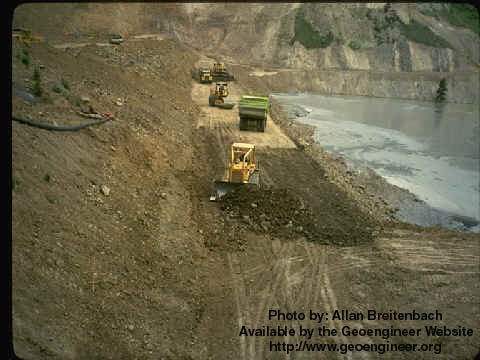 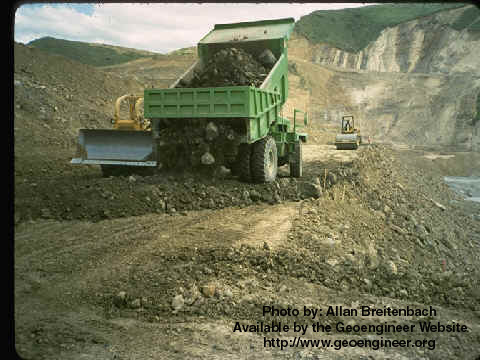 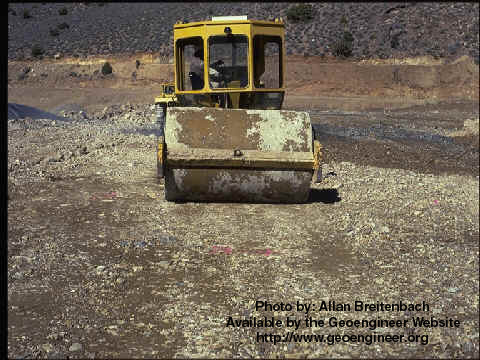 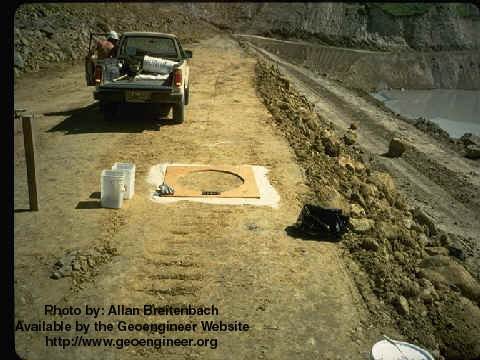 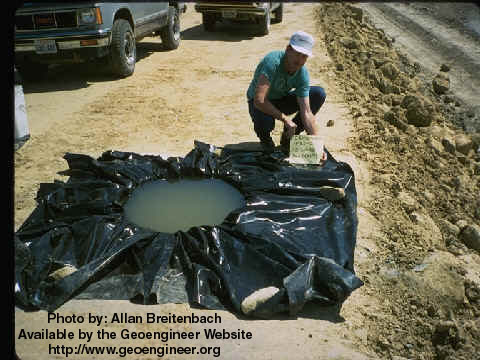 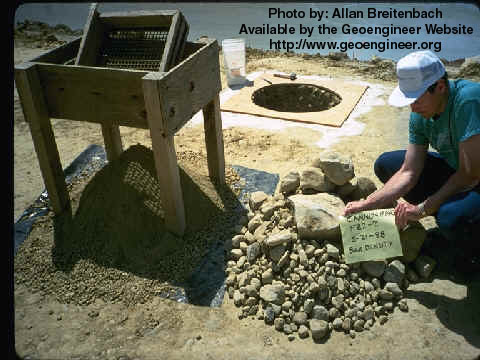 Maximum loose lift thickness is governed by maximum rock size and type of compaction equipment. Optimum rockfill loose lift thicknesses are generally about 18 to 30 inches (0.5 to 0.8 m) with maximum rock sizes limited to two thirds of the lift thickness. Larger rock sizes can be incorporated into the fill provided the rock does not protrude above the fill surface to hinder compaction. Lifts approaching or exceeding 3 feet (1 m) are generally beyond the effective compaction limit of conventional 10 to 20 ton vibratory steel drum rollers commonly used on modern day rockfills. Bulk density and gradation tests and settlement versus roller pass curves are recommended in test fills for large rockfill dams or other critical rockfill structures to determine the maximum lift thickness acceptable for the compaction roller used on site.

Experience indicates the most efficient rockfill compactors are vibratory steel drum rollers with vibrations in the range of 1,200 to 1,500 vpm, roller speed of about 2 mph (3.2 km/h), a minimum static drum weight of 8 tons on level ground, and a minimum operating dynamic force of 15 tons. Self-propelled rollers are the most maneuverable, especially at abutment contacts, for better coverage and compaction compared to rollers pulled by tractors. Vibratory rollers are effective in the forward direction, which produces the maximum downward force from eccentric rotating shafts in the drum. Modern self-propelled double-drum and single-drum rollers generally can reverse the rotating shaft for maximum compaction in the forward and reverse direction without having to turn around at the end of each pass.

Optimum roller passes are determined from surveyed settlement versus roller pass curves developed in large-scale test fills. The general limit is between 4 to 6 passes. More than 6 passes tends to crush and pulverize the rockfill surface without adding significant compaction to the lower part of the lift. Each roller pass should overlap the edge of preceding passes for 100 percent roller pass coverage on the surface. As a general "rule of thumb", the acceptable number of roller passes should be set at 80 percent of the total surveyed settlement in eight passes on a test section, according to Corps of Engineers test procedures. The average settlement of at least 5 survey control points is recommended for each 2 passes of the roller compactor to determine the acceptable number of passes.

Rockfills for compacted dam structures are generally placed in transitional zones with the most coarse and competent rock placed in the outer shell and finer more weathered rock placed in the interior or adjacent to earthfill filter drain and core materials. A similar transition zone is developed for leach pad site grading fills with the finer rock materials placed beneath the pad soil subgrade and overlying geomembrane liner system.

Well-graded rockfills with small voids tend to increase the in-place density and provide a stable mass for minimizing post-construction settlement. Poorly graded rock with large voids is sometimes desirable on the upstream shell of a water storage reservoir for drainage during reservoir rapid drawdown conditions and in spillway areas for erosion protection and energy dissipation.

Oversized rocks are generally placed on the downstream or exterior rockfill slopes and in downstream outlet/spillway plunge pools for erosion and energy dissipation purposes. Occasional extremely large oversized rock can be incorporated into rockfills provided no overhangs occur and the surrounding rockfill is compacted against the large rock pieces similar to compaction techniques against the rock abutments. Phased downstream raises to existing rockfill dams can incorporate the new rockfill into the oversized rock on the downstream slope of an existing dam provided the large rocks are not clustered.

In the past, rockfills for water storage embankments were dumped in thick loose lifts of typically 35 to 165 feet (11 to 50 m) and flooded with water to consolidate the rockfill to about 85 percent of its total settlement. Modern rockfills since the 1960's are placed in thin controlled lifts and compacted with vibratory compactors so that moisture conditioning requirements are not as critical to minimize post-construction settlement. Wetting is generally accomplished on the fill area unless water trucks have access to the rock borrow area. As with earthfill materials, moisture conditioning is desirable in the rock borrow areas for better mixing of moisture and materials during excavation, loading, dumping, and spreading for compaction. However, development of rock borrow areas involves blasting or ripping operations that sometimes make the borrow surface too rugged for conventional water trucks with spray bars.

Ideally the rock borrow should be sufficiently wetted so that no dust occurs when the haul truck or scraper dumps a load on the fill surface for spreading and compacting. Wetting of the rockfill in the fill area should be accomplished prior to spreading the new lift or following compaction of the lift. Wetting immediately prior to compaction by vibratory rollers significantly dampens the dynamic force of the compactor for inefficiency in compaction. The exception to this rule is a clean rockfill, which can be flooded with water and rapidly drained before compaction begins.

An ideal rockfill moisture content contains minus 3/4 inch (19 mm) materials that appear near optimum moisture, not overly wet or overly dry, for enhanced vibratory compaction. Wetting before placement of each new lift is encouraged to provide bonding between successive lifts without the need to scarify the compacted rockfill surface. There is no need to scarify compacted rockfill surfaces provided the surface consists of clean rock or is moist.

The Technical Committee 306 Geo-Education of the...