The first milestone included the use of low level hand placed rockfill dumps with timber facing on the upstream slope in the 1850’s for water storage and gold sluicing operations. The second milestone included a gradual increase in water storage dam heights to over 300 feet (100 m) high using thick dry and loose rockfill dump lift placement by trucks or draglines without compaction into the 1940’s. The third milestone included the use of high-pressure water jets and flooding techniques to wet and consolidate the thick loose rockfill dump lifts to achieve up to 85 percent of total dam settlement before reservoir filling from the 1940’s into the 1950’s. The fourth milestone included control of rockfill lift thickness with dozer spreading and roller compaction, in addition to documentation of rockfill gradation, moisture, and density in large-scale test fills from the 1960’s to the present day.

Modern day rockfill dam construction must rely heavily on past experiences for guidance pertaining to the placement and compaction of large rock fragments in a compacted fill structure. Special rock equipment and procedures are required for rock borrow development, hauling, placing, and compacting to produce a stable and acceptable engineered fill structure. The conventional earthfill test methods for controlling lift thickness, gradation, moisture content, and compaction are not applicable to rockfills and must be modified to a site specific compactive effort specification using test fills and large vibratory roller compactors.

This article presents a brief history of rockfill dam construction from about 1850 to present day. Rockfill construction at a gold mine site in Northern Peru is shown on Photos 1 to 2. 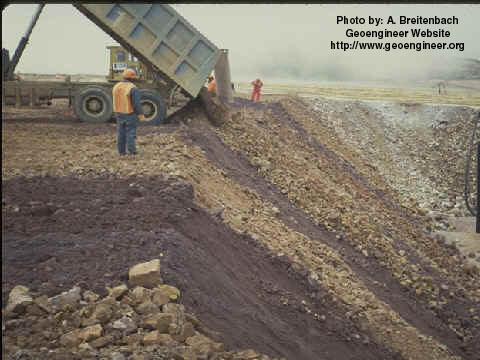 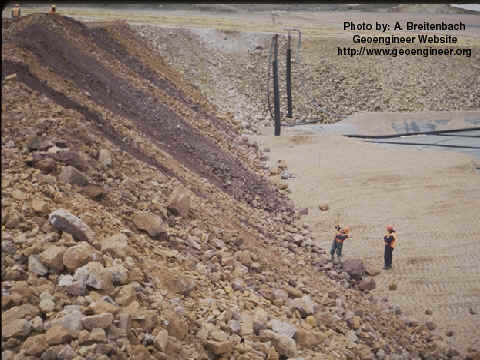 Rockfill materials have been used in dam construction since ancient times. However, modern day rockfill dam construction essentially originated in California about 150 years ago during the mining gold rush era. Drill and blast mining techniques by miners provided an abundant supply of rock materials for use in dam construction. Gold mining in the 1850’s also required a large and steady supply of water for sluicing and extracting the heavier gold nuggets from alluvial placer deposits. The miners used the rock quarry materials to construct water storage dams in remote areas by hand or with available mine haul and dump equipment.

The early rockfill dams were small and generally consisted of a single lift of loosely dumped rockfill with an upstream timber facing to retard seepage. The downstream slope was typically at the natural angle of repose approaching 1.2 horizontal to 1.0 vertical (1.2H:1V). The upstream slope was sometimes hand shaped to as steep as 0.75 horizontal to 1.0 vertical (0.75H:1V) for the timber facing.

One of the highest dumped rockfill dams constructed in the California Sierras during this early gold mining era was the Meadow Lake dam at 75 feet (23 m) high. The upstream slope was constructed to 0.75H:1V with the crest freeboard area at 0.5H:1V using hand placed rocks to maintain the face slope during rock dumping. The downstream slope was constructed to 1H:1V in the lower section and hand shaped to 0.5H: 1V in the upper section similar to the upstream facing.

The second milestone covers the time period from the 1910’s to 1940’s in which rockfill dump water storage dams began to exceed 100 feet (30 m) in height. The "dry rock dump" technique in rockfill dam construction developed into the placement of thick single or multiple rockfill lifts in combination with relatively low permeability upstream facing materials (timber, steel, concrete, or asphaltic concrete). One of the highest dry rock dump dams in this time period was the Salt Springs Dam in California at 328 feet (100 m) in height.

The unprecedented water storage dam heights for rock dumps constructed in thick dry loose rock lifts at the angle-of-repose was possible because the rockfill dams remained stable with no slope failures. However, the larger dams were beginning to experience seepage problems on the upstream facing due to post-construction settlement movements.

Additional settlements may have occurred from subsequent wetting of the dry rockfill due to facing leakage or abutment foundation seepage. The post-construction wetting action increased the total moist unit weight of the dry and fully drained rock dump mass. Repair of facing leaks during reservoir operations was expensive and involved underwater repairs or reservoir drainage.

The third milestone covers the time period from the 1940’s to 1950’s in which the dry rock dump placement continued, except the dry and loose rockfill lifts were wetted to promote self- weight settlement during construction of the larger rockfill dams. The 1940’s also included the first use of earthfill core and filter materials in the interior section of the rockfill dams. Rockfill dam heights began to exceed 300 feet (100 m) in the 1940’s to more than 500 feet (152 m) in the 1950’s. High-pressure jet wetting or irrigation flooding techniques were developed on the dry rock dump surfaces to consolidate and reduce large post-construction settlements to acceptable levels. Thorough wetting during construction reduced typical post-construction rockfill dam settlements from 5 to 7 percent without wetting to about 1 percent with wetting, thus reducing leakage and repair costs.

Prior to 1955, the loose rock dump lifts for in-place wetting or flooding typically ranged from 35 to 165 feet (11 to 50 m) in loose lift thickness with the maximum known rock dump lift placed at 200 feet (61 m). After 1955, the dry rock dump lift placement was modified on some dams to thinner lifts to incorporate the use of weaker rockfill materials in dam construction (weathered rock or poor quality rock materials that were locally available at the dam sites). The thinner rockfill lifts also reduced rock segregation where larger sized rocks tend to roll to the bottom of the lift during dumping and dozing operations. Rock segregation in a dumped fill slope can be seen in Photos 1 and 2, where boulder-sized rocks to 3 feet (1 m) in diameter rolled to the bottom of a 45 feet (15 m) thick dry rock dump lift composed primarily of sand, gravel and cobble sized fill material.

By the late 1950’s, the rock dump lift thickness on several large dams was reduced to 10 to 12 feet (3 to 4 m) thick with the top surface leveled and tracked by dozer passes and loaded haul truck traffic. This type of lift construction thickness and equipment provided a limited amount of compaction effort in the upper half of the loose lift with the lower half remaining relatively loose and uncompacted.

No rockfill water storage dam failures occurred for both the earlier "dry" and subsequent "wet" rockfill dumps. However, there was growing concern for the stability of large rockfill dams in more populated areas with the limited amount of engineering knowledge about rockfill strengths and the lack of established rockfill placement and test control procedures. This concern led to a rapid change in rockfill dam construction by the late 1950’s, after 110 years of relatively successful rock dump fill construction.

The fourth milestone covers the time period from the 1960’s to the present day in which rockfill construction changed from wet rock dump placement in relatively thick loose lifts to compacted rockfill placement in thin controlled lifts for heavy roller compaction. The wet rock dump technique was essentially discontinued by 1965 on large rockfill dams around the world. The current maximum compacted rockfill dam height is 800 feet (243 m) for the Alberto Lleras Dam constructed in 1989 in Columbia. Other compacted earth and rockfill dams are under construction to greater heights, including Tehri Dam in India at 853 feet (260 m) high and Rogun Dam in Tadjikistan at 1,100 feet (335 m) high. The highest compacted earth and rockfill dam in the USA is the New Melones Dam in California at 627 feet (191 m) high.

Compacted rockfills starting in the late 1950’s into the early 1960’s utilized dozer track passes, controlled routing of loaded haul truck equipment or the use of heavy steel drum or pneumatic rubber tired roller passes for compaction. Rockfill loose lift thicknesses for compaction varied, but generally were in the range of 3 to 10 feet (1 to 3 m) in thickness. The movement away from rock dump techniques toward controlled thinner rockfill lifts and compaction improved the rockfill density and strength, as well as further reducing the post-construction settlement movements.

The vibratory roller compactors are a relatively new concept in compacted rockfill construction, having been developed within the last 40 years. The tractor-pulled rollers began to change to self-propelled rollers in the 1970’s for improved rockfill lift compaction, particularly at the dam abutments. Single and double drum rollers with static drum weights of 8 to 20 tons are typical for use in modern day compacted rockfills. Rockfill materials are moistened in the borrow or fill area, if required, and compacted under fully drained conditions. Water storage dam rockfill loose lift thicknesses are generally less than 5 feet (1.5 m) for the 10 to 20 ton static smooth steel drum weight vibratory rollers.

Rock dump construction in thick and dry loose rockfill lifts has been successful in providing stable water storage dam slope conditions on large and small dams for more than 100 years after this type of rockfill construction began in the 1850’s. However, several larger dams constructed between 1910 and 1940, and exceeding 100 feet (30 m) in height, experienced excessive post-construction settlement and movement of the upstream facing materials during first reservoir filling.

Thorough wetting or flooding of the dry rock dump lifts during lift placement in the 1940’s to 1950’s, as well as a reduction of the loose lift thickness in the mid to late 1950’s, minimized post- construction settlement movements in the larger dams during reservoir filling.

From the 1960’s to the present day, the accepted practice for modern-day rockfill dam construction is moisture conditioning and compaction in controlled lifts with vibratory steel drum roller compactors. Self-propelled rollers are more efficient over tractor-pulled rollers, particularly at dam abutments. Rockfill moisture conditioning is generally site-specific with wetting of rock materials in the borrow or on the fill.

In comparison to the earlier rock dump techniques, the placement and compaction of rockfills in controlled lifts significantly reduced post-construction settlement, reduced material segregation due to high lift rock fall on the slopes, increased the rockfill density and related strength, and allowed lateral and vertical placement of transitional zones for fine to coarse rock materials and internal earthfill core and drain filter systems within the dam embankment.